Amanprana.eu » SLM - articles » Polluting of the oceans » Midway, message from the Gyre – by Chris Jordan 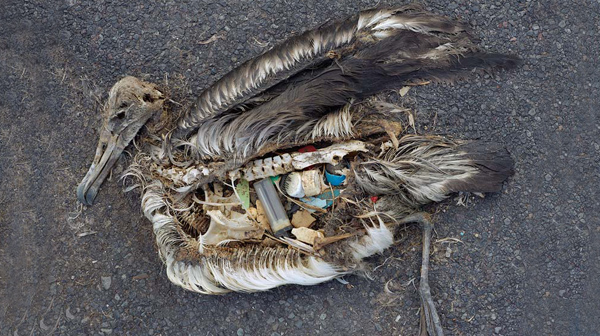 Chris Jordan, art photographer, tries to show the consequences of mass consumption in his pictures. The small island archipelago of Midway, halfway between the USA and Asia, in the northern part of the Pacific Ocean, harbours a nesting place of albatrosses (sea-gulls). This group of islands lies at least 3,000 km from any continent but is located in the middle of the ‘Gyre,’ one of the five large vortexes or circular ocean currents.

In this vortex, plastic and small plastic particles float, hover and dangle forever. On these islands you will find carcasses of albatrosses and their young that clearly show the cause of their deaths: plastic in their stomachs. In Chris Jordan’s photos not one piece of plastic was shifted, added, turned or moved in any way.

Midway, Message from the Gyre by Chris Jordan