And thanks to the simple coconut oil hand press, you’re eating the most delicious organic and the most fair trade extra virgin coconut oil.

Help the Amanprana-Solomon-Niulife mission. Your purchase gives purpose to many lives, gives families an income and makes people happy. Thank you.

The Coconut Oil Hand Press from Dr. Dan Etherington Changed the Lives of Thousands of Villagers on the Remote Solomon Islands

Dr. Dan Etherington was professor at the Australian National University (ANU) in Canberra, Australia. With this retirement coming up, the university asked him for his expertise as an agricultural economist in one final project.

His mission was to study the agricultural opportunities of the poor Solomon Islands. As adviser to the World Bank and the FAO (Food and Agriculture Organization), he was tasked with formulating proposals and ideas to improve the quality of life of thousands of villagers.

Dr. Dan’s mission became his true passion when he found a way to improve the living standards on these forgotten islands drastically. In 1997, the coconut oil hand press became a fact and with a feeling of euphoria, Dr. Dan saw the islanders produce their own coconut oil without needing electricity. At the start of the project, the orchids were growing in the neglected coconut trees. But gradually people, who craved better life quality, found a meaningful way out of their impasse. And their huts became houses. Now Dr. Dan leads a non-profit social enterprise that sells the Solomon coconut oil under the brand ‘Niulife’. 100% of their profits go back to the Solomon villagers.

Because the coconut oil hand press creates income opportunities for entire villages, the Solomon project was crowned as the ‘sustainable world project’ of 2000 in Germany. In 2006, Japan awarded Dr. Dan a ‘Gold Award’ for rehabilitating the Solomon rural economy with the production of extra virgin coconut oil. In 2008, Dr. Dan was welcomed into the Order of Australia for his innovations in small-scale coconut processing and his contributions to sustainable agriculture and economic development in the South Pacific region. In 2018, Dr. Dan also received the ‘Golden Award’ from the organisation Moral Fairground, for his tireless efforts in ethical business. For years, this coconut oil has been certified as Fair Trade by FairTSA.

The coconut oil hand presses were widely distributed amongst the farming families on the Solomon islands. The locally grown organic coconuts are harvested from the trees around the villages. These coconuts are hand pressed within the hour after opening. And after filtering three times, the world’s freshest, most delicious organic extra virgin coconut awaits you.

This is not only better for the environment, but also better for the flavour and your health. Glass is a non-permeable material. Therefore, the chance that something from the outside ends up in your food is non-existent. Moreover, glass does not contain any substances that may end up in your food. Glass is 100% natural and does not contain any BPA. Your Amanprana coconut oil retains its optimal quality.

The label of the Amanprana coconut oil is made from bioplastic (PLA). Bioplastic is biodegradable and is made from lactic acid. In addition, the glue is ecological and compostable.

Images of amanprana's Niulife Fair Trade coconut oil
Do you need visuals of this product? In our download centre you’ll find images in various resolutions. 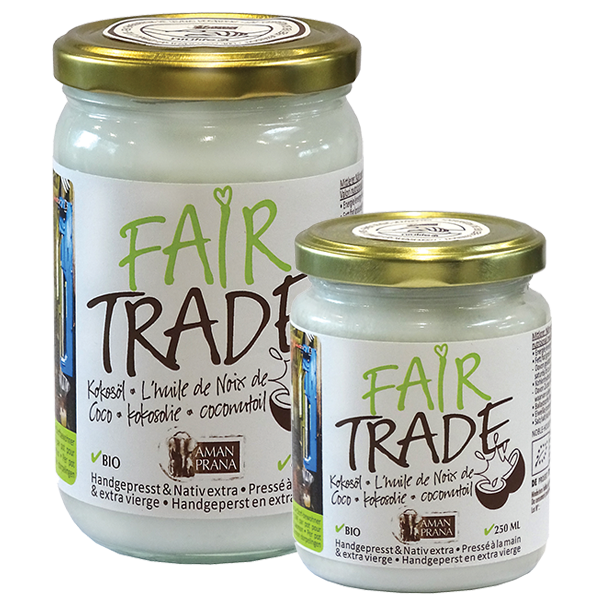 ORDER ONLINE WHERE TO BUY?

This product is for sale in natural health stores and local ‘organic stores’ (where to buy)
or via our official webshop Amanvida.

Dan is the founder and inspiration behind Kokonut Pacific.

He was raised on a farm in Kenya and following National Service as a pilot studied Economics at Rhodes University in South Africa (where he met his wife, Maureen), and Agricultural Economics at Cornell and Stanford Universities in the USA. He taught at the University of Nairobi until 1972 when he moved to the Australian National University (ANU) in Canberra. At the ANU his studies of the coconut industries in Asia, Africa & the South Pacific convinced him of the need for a village-based technology to produce coconut oil as value-added alternative to exporting crude copra.

In 1994 he founded Kokonut Pacific as a social enterprise and retired from the ANU in 1997 to commercialise the Direct Micro Expelling (DME) technology he had invented.

DME was awarded a Medal as a sustainable “World Project.”

Direct Micro Expelling (DME) technology was awarded a Medal by EXPO2000 in Germany as a sustainable “World Project.”

In 2006 Kokonut Pacific’s work in the Solomon Islands was awarded the Ryutaro Hashimoto Gold Award by the Asia Pacific Forum for Environment and Development (APFED) for its work in ‘Rehabilitating a rural economy with virgin coconut oil production.’

In 2008, Dan was awarded Membership of the Order of Australia for his innovations in small-scale coconut processing and contributions to sustainable agriculture and economic development in the South Pacific.

“Dr. Dan” is a respected authority on coconuts and remains passionate about the potential of the “tree of life.” He and Maureen have three children, nine grandchildren and are active in their local church.