Saffron in the kitchen: traditional dishes with saffron

Saffron was and is also used in fish bouillons. The French bouillabaisse and the Greek brodetto still use saffron for color and flavor. (Secrets of Saffron, the vagabond life of the world’s most seductive spice, Pat Willard, pp. 64-66).

The Moors brought saffron to Spain via southern Andalusia. Under the influence of the Moors, the Paella van Vallencia were made with saffron. Other rice dishes were made with saffron for color and smell. (Secrets of Saffron, the vagabond life of the world’s most seductive spice, Pat Willard, p. 73)

Saffron is also used in Spanish dishes, Fabado Asturiana (traditional bean soup from Asturia) and Pot Gallego (meal soup from Galicia). Albondigas al azafran, meatballs with saffron from La Mancha, are wonderful tapas with a drink, as is Tortilla Espanola de azafran, a potato omelette with saffron. And the Sopa de cebolla con azafran, a particularly tasty onion soup with saffron, almonds and sherry or the Montadito de centolla con azafran, a roll with crabs and saffron. The Mojo picron Canario, a spicy leek sauce from Canarian cuisine, is often eaten with potatoes and the mejillones al azafran, mussels with saffron, are a classic in Spanish cuisine, as is the arroz con azafran (rice porridge with saffron). There is also the Gazpachos Manchegos, a casserole with rabbit and saffron from La Mancha and the Zarzuela de pescado, a traditional Spanish fish pan with saffron. In Teruel, Spain, the crème brulée with saffron is famous.

Saffron in the world cuisine

In the Argentine and Uruguayan cuisine, one knows the Chimichurri de azafran, a sauce and marinade with saffron. (Secrets of Saffron, the vagabond life of the world’s most seductive spice, Pat Willard, p. 108). In northern Italy and Switzerland, saffron is used for risotto. Saffron can be added to cakes … it is wonderful in a lime or lemon cake or in a Cornish saffron cake, based on a recipe by Mrs. Lena Thomas from 1971. In India, saffron is found in many dishes: in rice, safron noodles, in sweets, desserts and ice cream. India uses saffron in Ayurveda and religious rituals. In Saudi Arabia, the real Arab coffee is made with saffron and cardamom.

On the last weekend of the saffron harvest, a big saffron festival, the ‘Fiesta de la rosa del azafran’, is celebrated in Teruel, Spain. The date changes every year. The festival usually takes place on the last weekend of October. The first festival was celebrated in 1963. From starters to desserts, all dishes are prepared with saffron: from saffron egg dishes to saffron desserts.

Tip for more taste, color and fragrance with saffron

Saffron is soluble in water. The saffron threads should preferably be ground directly and then soaked in a liquid (water, milk, tea, etc.) for 5 – 30 minutes in order to be able to give off enough fragrance, taste and color. Alcohol and any alkaline solution are also very suitable to let the scent, color and taste of saffron come into its own. If you use whole threads without grinding them, less fragrance, taste, and color will be given off. 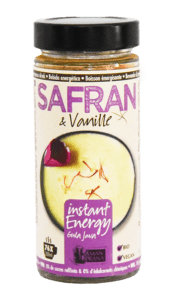