Shaving: from barbarian torture to a gentle caressing ritual.

For the ancient man who started removing his hair, this job was anything but painless and pleasant. Shards of flint, shells or splinters of obsidian, are some examples of the torture instruments, pardon, shaving tools, which he had in prehistoric times.

Shaving with vegetable oils was the first, more civilized form of shaving. The man who wanted to go through life beardless could not only shave himself, but also be shaved by the ‘beardmaker’ or ‘barber’.

With the current shaving soaps, gels and shaving oils, shaving yourself is becoming an increasingly pleasant (male) pampering moment.

The history of hair removal takes us back to the Stone Age, where the Neandertals got rid of hair by means of epilation and ‘tattoos’ were created. The first ‘disposable razor’, from about 30,000 years BC. was a ‘flint’ that did not miss its target, but quickly became blunt. Also with this one made incisions in the skin, where pigment was put in, resulting in a tattoo.

With the ancient Egyptians, the Romans and the Greeks the shaving ritual became a bit more civilized. For example, the ancient Egyptians used sharpened knives made of copper or bronze to obtain a clean-shaven face. The rich were shaved from head to toe by the staff. Fashion dictated whether male faces could be bearded or clean-shaven. But because utensils were expensive, shaving was primarily the domain of courtiers and the wealthy.

Wearing a beard was and is certainly not a non-committal, purely personal matter in different cultures. For example, growing the beard among Muslims is still ‘Waajib’ (mandatory) for all men.

In the past, having the beard shaved (involuntarily) could also have been intended to humiliate. For example, it was customary among Franks and Germans to shave a conquered king or prince bald and to strip off his beard, which was shameful and humiliating.

On the other hand, a beardless face could also offer protection. Alexander the Great understood very well that by grasping a beard by ‘the enemy’ during a battle a man could lose out.

Nowadays we can generally speak of a fashion trend in Europe. Shaving a certain shape or shaving and maintaining more intimate areas simply contributes to our daily hygiene, care and comfort.

From the emergence of the medieval craft organization up to and including the 18th century, the profession of ‘bearder’ was related to healing and medicine. The beard maker was not only a shaver, but also the man who made the instruments.

Before the 14th century, the names “beard maker” and “barber” are common. Both bearded maker and barber were both in the service of the martial art. The beard maker made the axes, the barber provided good armor to protect the head and jaw.

After splitting, the armor maker went his own way. This split was gradual, but became a fact in the 14th century.

The second stage of the bearder shows a more pronounced character of service, towards the physical care of persons: hair cutting, beard shaving, molar pulling and bloodletting.

The shaving basin was already known as a barber’s sign at the time the craft was organised. The barber was trained practically and theoretically in surgery.

Each candidate beard maker had to pass two exams: one for beard maker and one for surgeon. In the year 1660 there is a strong division between the barbers and the surgeon barbers. The barber was given a choice: either to cut hair and shave, or to take the path of a surgeon barber, in which the practice of surgery played an important role.

The first steel razor was invented in Sheffield in 1680. It was elongated and often had to be sharpened with a razor belt, otherwise it would become blunt.

Advances in manufacturing techniques of the Industrial Revolution brought simple shaving closer to the general public. That moment arrived in 1880, when the first disposable razor came on the market. In one fell swoop, the razor changed from a single open blade into a mass-produced product, accessible to everyone.

Shaving is getting more fun.

Shaving with vegetable oils was the first known form of shaving. Today, traditional shaving soaps and shaving gels are still the most commonly used, but shaving oils are also making a comeback. The big advantage of a shaving oil is the gliding ability on the skin, so that the skin is better protected against irritation and wounds.

Amanprana has developed a flavored oil mixture that has a 3-in-1 function: close shave – nourish and aftershave. In addition to the face, this shaving oil can also be used for the rest of the body, including the intimate parts.

All ingredients in this oil are edible and organic!

Shaving oil, beard oil and after shave in 1 bottle 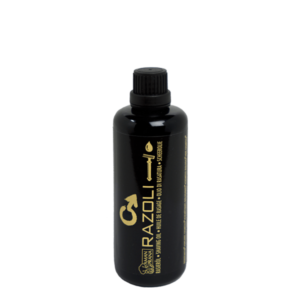 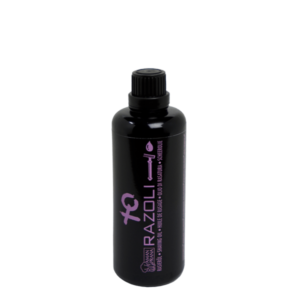 Shaving throughout history Guide to a perfect shave The benefits of shaving your legs, armpits and pubic hair with shaving oil Razoli for men by Amanprana ideal as a beard oil.