Shaving in history – from human pride to religious humiliation

The history of shaving takes us back to the Stone Age. The Neanderthals removed hair using a type of epilation in the form of tattoos. Around 30,000 BC, the first disposable razor was invented. This “flint” was a sharp object that worked purposefully but became blunt very quickly. It was used to nick the skin. Afterwards, the notches were treated with pigments. In this way, a tattoo was created.

We find the first images of men without beards in the time of the first Egyptian dynasties. Among the Egyptians, the removal of hair from the entire body was part of an obsessive hygiene and was a symbol of beauty, youthfulness, purity and higher status.

Men, as well as women and children, had their scalps shaved bald. Egyptians wore a kind of wig to protect themselves against the sun or as a fashion trend. Soap was hardly available to protect oneself against head lice, infections or diseases in the heat. So it was much easier and more hygienic to remove as much hair as possible. The legs and intimate parts of the body were also shaved bald for the same reason.

The razors used at that time were made of gold. After shaving, the skin was cared for with pleasantly scented oils to embalm, perfume, nourish and protect the skin.

Throughout history, the beard had a social-cultural meaning, well or not wearing a beard and the shape of the beard had certain meanings. A beard was always valued in different ways in different cultures and periods. Due to the corresponding meaning, it was (and is) certainly often not a matter of free choice whether and how one wore a beard. Shaving a beard on a defeated enemy could be very humiliating in certain religions.

Among the Romans, however, shaving was regarded as a symbol of youthfulness. Among the Franks and Germanic tribes, it was a custom to shave a defeated king or prince bald and remove his beard. The shaving meant disgrace and humiliation.

In the Macedonian age, the beard was a symbol of wisdom. Only philosophers and old men were allowed to wear a beard. In the Europe of the late Middle Ages, beards were hardly ever worn, only legal scholars and old men still wore beards.
Alexander the Great had the beard of his teams shaved so that the opponent could not grab the beard during the fight.

Nowadays, a beard is generally more of a fashion trend in Europe. Shaving in a certain way or shaving and caring for intimate parts of the body is part of our daily hygiene, grooming and comfort.

Traditional way of shaving with shaving oil and a straight razor

Shaving with vegetable oils was the first and historically best known form of shaving. Nowadays, shaving oils are not used as often as traditional shaving soap and shaving gel, but the popularity of oils is rapidly increasing. This is mainly due to their properties, the oils make the razor glide better over the skin. The oils also nourish and protect the skin better. Shaving with a razor is the purest form of shaving, with the least irritation.

Shaving oil is also easier to use. People always want a faster and better shave with electric razors (Braun, Philips, Epilady) or advanced razors. We have strayed very far from the basis of optimal shaving, forgetting that the best solution may be found in pure simplicity. Pure shaving oil from Amanprana works excellently with this simplicity and pure nature, without adding any chemicals.

Shaving with a razor

Amanprana shaving oil in combination with a razor provides a smoother, smoother and easier shave. The shaving oil creates a smooth barrier between the skin and the razor. The skin is soft and smooth due to the shaving oil. The razor can glide easily over the skin, so cuts and scratches are less likely to occur. The direction of hair growth is clearly visible through the oil, making shaving or modelling more efficient. The nourishing shaving oil by Amanprana is well absorbed after shaving and continues to act as a nourishing care for the skin.

Razoli for men and women

Use Amanprana Razoli while shaving and your skin will get extra support and a beautiful and smooth look. The oil is also nourishing and conditioning, leaving your skin feeling silky soft.

Razolie for men: shaving oil, beard oil and aftershave in one 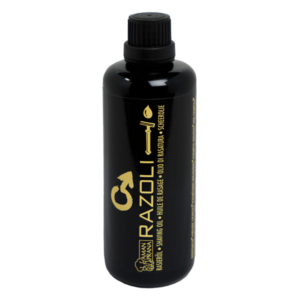 Read more about Razolie for men: shaving oil, beard oil and aftershave in one

Razoli for women: shaving without irritation? 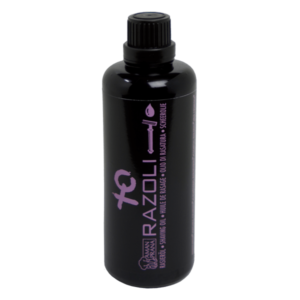 Read more about Razoli for women: shaving without irritation?

Guide to a perfect shave Shaving: from barbarian torture to a gentle caressing ritual. The benefits of shaving your legs, armpits and pubic hair with shaving oil Razoli for men by Amanprana ideal as a beard oil.