Amanprana.eu » Inspiration » What is Matcha?

Matcha is Japanese green tea ground into powder. It is made from the leaves of the Camellia sinensis tea plant. What makes this unique green tea so special is that it contains a lot of antioxidants, vitamins, minerals and amino acids. This is due to the origin and method of production of this green tea. The different ways of treating the green tea leaves determine the tea quality. There is only a small Japanese elite of tea farmers capable of producing high-quality Matcha.

The history of Matcha tea

Tea was traditionally considered a medicine. To absorb the natural and healthy components of tea, the obvious solution was to grind steamed tea leaves into a fine powder. Matcha was born!

In 1191, Zen Buddhist Eisai brought this new revolutionary method of drinking tea from China to Japan. He noticed that drinking matcha improved his Zen meditation sessions by inducing a state of calm alertness. Master Eisai travelled all over the country and planted tea everywhere. But matcha was long “the secret medicine” at the court of the emperor and elite.

In the 16th century, another Zen master reinvigorated the history of tea in Japan: Sen-no-Rikyu created the tea ceremony, in which matcha plays the leading role. With the tea ceremony, this special green tea broke through among the Samurai, the Japanese caste of warriors. They used it as a meditation drink.

Today, drinking matcha is an integral part of Japanese culture and this green tea enjoys growing fame. But producing the highest quality matcha remains an art.

Matcha is Japanese, green tea ground into powder. Its plantations look very different from other tea fields. 4 weeks before harvest, they cover them with dark tarpaulins. This gives the tea plants 90% less sunlight. To compensate, the tea plants start producing intense chlorophyll and the leaves produce very high levels of amino acids. A mildly sweet flavour and brightly coloured green leaves are the result.

Matcha has the typical umami flavour

Good quality matcha has the typical umami flavour. ‘Umami’ is the pleasant, sweet, full-bodied flavour that comes from the amino acids in the tea. Besides sweet, sour, salty and bitter, it is called the fifth flavour.

The more amino acids matcha contains, the higher the quality. They help deeply relax and bring mental clarity while studying. It is the ideal state to relax, learn novelties and boost our creativity. L-theanine is an amino acid found almost exclusively in green tea.

Sado or the Japanese tea ceremony

The way of tea, called ‘chanoyu’ or ‘chadõ’ (pronounced ‘Sado’) in Japanese, is the Japanese art of tea making. The tea ceremony is all about creating the right environment to enjoy a perfect cup of tea.

In the way one performs the ceremony, the influence of Zen Buddhism is evident. The use of spring water is recommended over mineral water. Mineral-poor water such as Pineo is quite suitable for brewing green tea of premium Gyokura or Kimigayo according to the rules of the art.

How do you make matcha?

Consciously sip your green tea. The taste is pleasant, mild and at the same time intense and strongly aromatic.

“One cup of Amanprana matcha tea contains the same nutritional value and antioxidant content as 10 cups of ordinary green tea. Actually, you can’t compare the two. With matcha, you drink the whole leaf, the whole thing. With green tea, just the extract.”

Where is matcha produced?

AIYA is Japan’s most renowned matcha producer and has been since 1888. Many tea farmers have been working with them for generations. The company is based in Nishio, Aichi, in Japan. Nishio is the centre of Japan’s matcha production and one of the oldest growing regions for tea in the world. The first tea plantations emerged here as early as around 1200.

Nishio boasts ideal conditions for tea cultivation: humid hot summers, clear, clean rivers lining the growing region to the west as well as to the east, fertile soil, close to the warm southern coast of Japan and far enough away from the larger population centres to have enough space for pure tea.

The quality of matcha coming from the Nishio region is reflected by its dominance in the market: over 60% of all Japanese matcha teas come from this region.

In the early 1970s, the president of AIYA had a vision: to manufacture top-quality Japanese green tea organically. Well before organic products became popular, he gathered the best tea farmers around him and started growing green tea ecologically with them. Their commitment to the well-being of nature translated into helping (both financially and physically) reforest mangrove forests in Thailand over the past 15 years.

Matcha as a superfood

The exceptionally high ORAC value of 168.500/100 grams (A method of expressing the antioxidant value of food) makes this tea a powerful antioxidant. This is mainly due to the EGCGs (Epigallocatechin gallate) found exclusively in green tea. The antioxidant activity of matcha scores much higher than other known superfoods such as blueberries, pomegranate and broccoli. EGCG does not affect the glycaemic index, is high in fibre, vitamin C and E. Besides antioxidants, this unique green tea also contains amino acids, of which L-theanine is the most notable for its calming effect. Amanprana’s Kotobuki Matcha tastes slightly more bitter than other top matcha, due to its higher tannin content.

Matcha is full of extra chlorophyll

Matcha owes its bright green colour to a huge chlorophyll content in the leaves of the green tea. While growing in the shade, they produce an extra amount of chlorophyll.

Hans Fischer (physician and organic chemist Nobel Prize winner 1930) was particularly concerned with pigments in blood and chlorophyll in leaves. He discovered that the chemical composition of chlorophyll is 98% identical to our blood. Chlorophyll is the ‘blood of the plant’ and has a wide range of activity.

Unlike ordinary green tea where you drink an infusion of the leaves and discard the leaves themselves, with matcha the tea leaves are ground into powder. You ‘drink’ the powdered leaf, as it were, and all the vitamins, minerals, antioxidants and ballast substances are included. 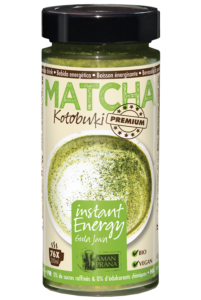 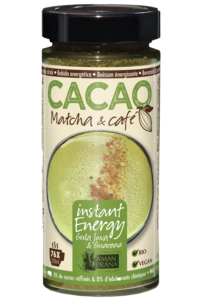 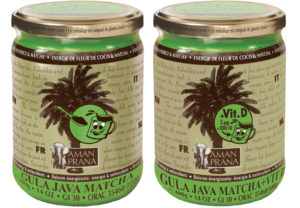 How to make matcha What is the Bovis value? Origin of Amanprana’s Matcha

View all recipes with matcha